This year, I am participating in OWS CyCon, a completely online and free book convention. I've been having a lot of fun designing my digital "booth," participating in blog-hops, setting up for cover wars, and interacting with the other authors. Many of them are indie-publishing like me!

One of the questions which I've been frequently asked over the years is: "What are your favorite books?" I have far too many to ever be able to answer without a long hesitation as my brain goes through the list, and I stumble through picking five at random. So, I thought I'd narrow it down to "What are Holly's top 5 favorite Science-Fiction books?" However, even that needed a "twist" to make it work... My indoctrination into the wide world of Sci-Fi came in the form of three Hammermill paper boxes, full of books ranging from War of the Worlds to dozens of Star Trek and Star Wars books. A family friend learned of my blossoming interest and had handed me his entire collection! Nearly thirty years later, I still own most of them and all have had some kind of influence. However, here's the closest thing I'll get to a Top 5

Number 5 This is a book no longer in print, but it was my introduction to "Sci-fi other than Star Trek and Star Wars" and has stood the test of time for me.  "100 Great Science Fiction Stort Stories" is one I've kept hold of from those original boxes handed to me. I've honestly lost track of how many times I've read it! 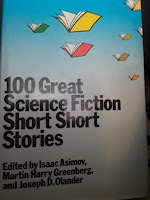 Number 4 I fought over this one, as there really are three which qualified, based on how much I enjoyed reading them and how it ended up affecting me as a writer. However, I'm going with the middle book of an unofficial trilogy. Many know of Lois Lowry's book "The Giver," but did you know it had two sequels? "Gathering Blue" is my number four, as I can clearly see its influences in some of my writing. The third in that series was called "The Messenger" for anyone interested in the rest of the story. She ties in characters from both books, making it quite clear it is a trilogy after all!

Number 3 Though it wasn't on the top five until recently, George Orwell's 1984 has secured its place. After hearing numerous mentions of it over the past few years, I re-read it - not having picked it up for around twenty years. Oh, the difference time and maturity makes on the mind!

Number 2: And now for the twist! My number two choice would be... almost all of the original expanded universe Star Wars books starting with "Splinter of the Minds Eye" and up to "Showdown at Centerpoint" when you line the books up chronologically from when they happened in the universe. Geeky, I know. I'm not sorry, though.

Number 1: I'm a Trekkie and proud of it! Not only am I a Trekkie, but I'm absolutely fascinated by a minor character named Saavik... to the point where I've based one of my characters in Star Trek Online off of her- making Saavik T'kayeda's mentor. It's no surprise then that "The Pandora Principle" by Carolyn Clowes is my number one favorite book. She took the few little glimpses we had of Saavik and weaved and entire history out of the mystery. It is fabulous!

*OWS CyCon officially runs May 17-19 with the CyCon website and Facebook events acting as the hub for all of our events. Sign up for our newsletter or RSVP to the event to make sure you don’t miss out on any of the bookish goodness we have to offer. Plus, you can read more about our participating Sci Fi authors and their Top 5 favorites in Sci-Fi before CyCon starts. Visit the blog hop page any time leading up to CyCon for the latest posts and your chance to enter our MEGA giveaway (open May 10).
Posted by ddraigswife at 2:48 PM No comments:

On How Ehlers-Danlos Has Affected Me

It has been nearly six years since I last focused a blog post on having Ehlers-Danlos Syndrome. So much has happened since then! So, I thought it was time to reflect on the day-to-day with this genetic disorder. How has EDS affected me?
My mornings are full of false starts, though I move from the bed and my C-PAP to the couch when my husband goes to work. There is the morning "what's dislocated" moment and getting my first dose of medications in, as well as a liquid breakfast. Gastroparesis is not kind to solid foods in the morning.  If I'm in physical therapy, at the gym for time in the water, at the clinic for infusions via my chest port, or have doctors appointments, those all happen in the mornings. When I'm lucky enough to not have those, I sleep in.
I'm blessed to be able to work from home with a wonderful accredited homeschool academy. Losing my ability to teach full-time was a very hard blow, but I could not keep up and was dislocating joints in the classroom at random times or in the halls due to a rushing teenager.  However, I now get to work with students and their families from my home office. I use adaptive equipment like a vertical mouse, voice to text software, a brace to hold me up better, and athletic tape or ring splints on my fingers. On bad days, I work from the couch. I'm exhausted by the end of those hours, though, so end up needing a long nap in the late afternoon.
Most of the daily tasks happen right after that nap. I'll work on home physical therapy, will try to get a house-task done, or will be outside in my adaptive garden or greenhouse. Regardless, I'm braced up, taped up, and with an electrolyte drink in my hand and phone in my pocket in case I fall. I try to make large batch meals so there are nights where we have leftovers, as it is exhausting to cook. After that, I'm back on the couch, working on my novels or gaming and roleplaying with my friends. On really good nights, I can get some sewing in as well. Sleep does not come easy, due to "painsomnia" and side effects from the medications keeping me alive. I'm up late... even when I want to be asleep.
There is so much I miss, like being able to go hiking whenever I want, or the freedom to run errands without having to build in ample crash time afterward. I hate the looks I get parking in handicap and have been verbally accosted even when I had a cane and knee braces and ankle braces on. I miss dairy and nightshades and being able to cook whatever I wanted. I hate being on so many medications, though do what I can with natural methods too. I own so many braces, splints, rolls of therapy tape, and compression garments that I could open my own supply store. I miss being able to look at my future and actually seeing it. So many of us die way too early. I miss the income of working full-time. It has made things tougher for us for sure. There is so much our house needs or what we want for it that we just cannot handle now.
However, there have been some positives too. Without the people I've met in this journey, I wouldn't be in the position I am today - volunteering for Dysautonomia Support Network in their largest Facebook support group. I've made some amazing friends through this battle. I wouldn't have been able to teach so many about rare genetic disorders (my husband has PKU, so I get to double up on the education giving!) There are people I've been able to influence positively because of what I've gone through. I also wouldn't have gotten back into sewing, wouldn't have been sewing commission work, and wouldn't have met the Piecemakers, the charity quilting group I volunteer at on Saturday mornings. They keep me going, though I'm on the couch for hours afterward. I also wouldn't have had the time and focus to write novels. Two are already out with a third coming in June and another by the end of the year.
Ehlers-Danlos Syndrome is a beast. It is a heavy burden to bear which affects every part of my life. However, it has made me who I am today.