As part of OWS CyCon, I've been given the chance to interview a fellow indie author. It was an exciting time! Here is the outcome of it. I hope you enjoy learning about her world. 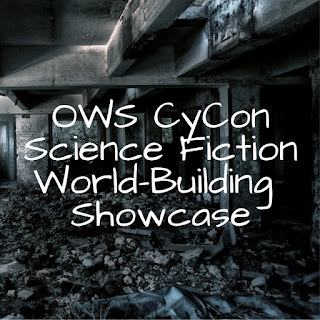 Welcome to another fantastic stop in our World-building Showcase blog hop! On this stop, we’re highlighting a story where the world changes or ends as we know it, but you can find a full list of authors and topics on the OWS Cycon website. Let’s dive in!
Welcome Kristin Ward!

They tell me the country looked different back then.

They talk of open borders and flowing rivers.

They say the world was green.

But drought swept across the globe and the United States of the past disappeared under a burning sky.

Enora Byrnes lives in the aftermath, a barren world where water has become the global currency. In a life dominated by duty to family and community, Enora is offered a role within an entity that controls everything from water credits to borders. But it becomes clear that not all is as it seems. From the wasted confines of her small town to the bowels of a hidden city, Enora will uncover buried secrets that hide an unthinkable reality.

As truth reveals the brutal face of what she has become, she must ask herself: how far will she go to retain her humanity?

*            Does language play any role in your world? Does everyone speak the same language, or is there variety? Did you invent any new slang or terminology during your world-building process?

My book takes place in the United States of the future. Aside from story-related terminology, the language of the book reflects our present dialogue.

*            What kinds of climates do your characters experience? Do they see a lot of change or is it always the same? Has your world always had this kind of climate, or has it changed over time?

My book is a dystopian fiction based in a world ravaged by drought where water, the most valuable resource on the planet, is the global currency. Following a prologue which provides an essential backstory for the world I created, readers are introduced to a young woman, Enora, who is on the cusp of graduating high school and entering adulthood – this transition is tainted with frustration and worry over where she will end up as options are limited. Everything in her society is rigidly controlled – from water credits to borders – by an entity (the Drought Mitigation Corporation or DMC) who took control of water resources early on in the crisis and now have absolute control of every aspect of her community. When she enters a role within this entity, Enora discovers startling secrets that make her question who she is and what she stands for.

*        Is there any kind of faith system in your world? Did you draw inspiration from any real cultures, living or dead?

I was inspired to write After the Green Withered and the sequel, Burden of Truth, while completing research for a graduate course I wrote in environmental education. My course included concepts regarding earth’s history and, within this, I learned a great deal about the impact humans have had on the planet. As I studied and composed the course, an idea began to germinate.

What if there was a global drought due to the impact humans have had on the planet?  What if water became the global currency?

That seedling idea sat with me for a year or so as I finished my course writing and began to teach a few graduate courses. Eventually, I began to write the story but it took a whopping five years to get it from draft to publish! The final push actually came about after I read an article about Cape Town’s water crisis. At the time of the article, it was predicted that Cape Town’s water supply would run dry in April of 2018, not tens of years in the future. Reading this, I knew the story I wanted to tell was incredibly relevant so I buckled down and finished the first book.

*        What do people in your world do for fun? Are there sports, games, music, or other activities they do in their free time?

The world of my main character is rigidly controlled. It is a world of scarcity and deprivation. People in this society don’t have much opportunity for frivolity which is why this element isn’t present in my books.

*       What kinds of transportation and other interesting technology do your characters have access to? Are they ahead, behind, or a mix of different kinds of tech compared to where we are now?

The vehicles in my book are electric or solar-powered. This is due to the environmental catastrophes that impacted the world of my main character, changing the US from a country of 50 states to 18 states based on river basins. These events were the result of climate change that was exacerbated by the increase in the burning of fossil fuels.

*       Without giving away too much, what can you tell us about your world-ending event and how it led to the world of your story? Was it a distant event or does it happen as part of your tale?

Numerous readers have told me that the book is a truly frightening vision because they could see it coming to fruition in real life. It is a wake-up call. An important idea is that the choices we make, environmentally, have consequences. We may not see them in our lifetime, but what we do can and will affect the future. In the end, if the people in Enora’s world had made different choices long before she was born, then her life and the events that shape the story, would have been a much different tale to tell.

*            When you build a world, what is your process like? Do you do a lot of research upfront, wing it completely, or something in between?

I conduct an enormous amount of research before and during the writing process. It is important for the story to have elements of realism. This helps to ground the reader in the events of the book because the fictional world reflects the one the reader experiences every day.

*     How central is the setting of your story to the story itself? Is it more of an interesting backdrop, or is it integral to the events of the story?

The setting is an integral part of the story. It is our world after years of unregulated fossil fuel use and indifference to the effects of climate change. This world is one that has been altered so much by man that is had become unrecognizable.

*    When helping the reader get to know the world you built, what techniques do you use? Do you tend to be upfront about things, or keep the reader in the dark and feed them only bits at a time?

I wrote a very detailed prologue that is essential to the story. Before delving into the society of my main character, the reader must fully understand the world that she inherited. This shapes her perception of the controlling power and is a foundational part of the storytelling.

*    How much of a role does realism and hard scientific fact play in your world-building? Do you strive for 100% accuracy, or do you leave room for the fantastical and unexplainable in your world?

Realism is very important to the story but not to the degree that I strive for 100% accuracy. The research I conducted over the span of both books laid the foundation for the realistic aspects of the world itself and many elements within it. I have worked to explain various ideas in both books because they are interconnected with the world itself.

*   Do you have any specialized training or background from your “real life” that has informed your world-building?

The idea for my debut novel derived from a graduate course I wrote in environmental education. I was conducting research as I crafted the course components and the premise of this story was born from that experience.

* How do you keep all of the details of your world and characters straight? Do you have a system for deciding on different factors and keeping it all organized, or does it live more in your head?

I should probably have a structure in place to keep track of the details in my work, but I rely on my memory. Let’s hope I don’t start experiencing early memory loss!

*    Did you experience any difficulties while building your world? Any facts that refused to cooperate or inconsistencies you needed to address while editing?

I am in the unique position of having the premise for my book develop from research I was already conducting. From this point, I compiled a list of ideas I wanted to further explore and potentially add to the story. Being a total nerd, I enjoy the process of digging into science to better understand the concepts I am writing about in both books.
Where can people find you on the web? 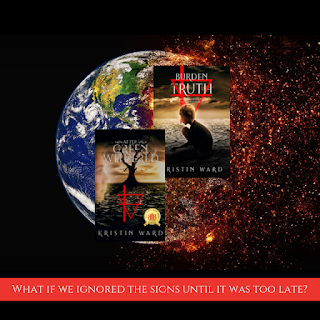 For more stops on our End of the World World-building Showcase, visit the tour page on the OWS CyCon website. You can also find more great Sci Fi authors and books on our main Sci Fi event page.