This week started out as any other. There were substitute jobs lined up, appointments made, and gardening to keep up with. Since the two new medications for my back and hip had failed due to bad reactions, I was frustrated at the level of pain. However, I pressed forward. 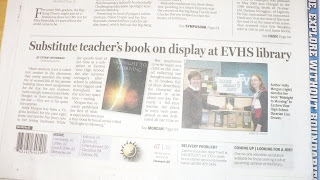 Things changed quickly throughout the week though and by Saturday I couldn't even imagine what the ending held. Monday was fairly "normal" save for having one of the teens I mentor (he calls me "mom") come over to help mow the lawn. Our tractor cannot be fixed fast enough! Tuesday brought the beginning of what would become a wild week. I was at Farmington, covering for one of the amazing teachers who help develop those with major delays. I was outside helping with unloading buses when another teacher said "Aren't you the author who was in the Star-Exponent?" After confirming that I was, we chatted about the novel and how things were going with sales and such. Others got involved and the time passed quickly. Suddenly, she said that I should have a table out at the street festival this weekend. I admitted to not knowing about it and wasn't sure I could get a table this late. She instantly offered me a corner of her booth, where she'd be selling Italian Ice. I thanked her and said I would be happy to help her out for letting me use her table.
That afternoon the faltering breaks on the back of my car failed flat out. I had to change my plans and grind over to the shop. After handing it off to the mechanic, I wandered to the grocery store and slowly meandered through my long list. I was at the mercy of Owen's work now. He'd have to leave there to rescue me from the far side of town. I was in so much pain and rapidly forgetting all that also had to be done this week.
Wednesday was tough as getting Owen motivated to take me to work wasn't the most successful endeavor. However, the students at the high school were good and the weather was nice that afternoon as I waited for him to pick me up. There was a lot of house work to do that evening (moving furniture) and in the process, I had forgotten to order the books for the author table on May 26th. I had also forgotten to transfer funds into the proper account so that I could purchase the softbacks. I was losing site of all things good.
Thursday, despite the pain, I worked outside for 2 hours whilst the installers started working their magic inside (the last of our new flooring). Once worn out, I went back inside, fixed the screen door that Hobo had knocked out in his panic to get to me, and sat in the kitchen. The dogs were locked in there with me and after making kale chips and some other goodies, I was bored and feeling really claustrophobic. The floors were finished around two and the process of setting furniture back in place began. By evening I was worn beyond measure and once again, forgot to transfer funds.
Friday found me trying to contain a worked up fifth grade class, who were supposed to have field day and who ended up inside all day due to storm warnings. I had errands to run after school and it was late before getting to the computer. I went to transfer the money to the account we use for the novel and discovered it was too late. The transfer would not go through until Monday and there wasn't enough in the account to cover the purchase of the fifteen copies I needed. I looked at my main account and made the decision to pay from that, on a wing and a prayer that I could make up the amount needed to cover the full amount soon. Not forgetting the offer of the table at the street festival, I printed a couple posters, packed a bag and went to an early bed-time. I sure hoped she was serious, because the 4 copies I still had with me must be sold asap to make up those funds.
Saturday morning was warm and slightly breezy. I made my way to the festival and found the teacher excited to see me. I helped her finish setting up and sales of Italian Ice started instantly. Before long, I was handling the money side of her booth and keeping her stocked with cups and spoons. There wasn't much time to work on making eye contact or calling out for the book. I did see one teacher from the high school though and she bought a copy. A short time later, a young man came up and we talked about the novel for some time before he ran off to borrow money from his dad for a copy. At that point, the Ice stand was in full swing and there was no looking back. I don't know how she ever handled it alone in the past with that many people! I would have been in a panic. By mid-afternoon, pain was radiating from my foot. The compression garment had pinched a blister onto my toe. I tried to fix the situation, but the pain just got worse. Knowing my physical limitations and knowing I had been pushing them for the past five hours, I sadly told Ms. H that I had to leave. I packed up the two novels and went to give her a hug. She surprised me by telling me to go take $40 from the sales bag. I started to protest but she said I had worked so hard when I didn't have to that she couldn't let me leave empty handed. With tears in my eyes, I thanked her. What was the amount I still needed to make ends meet for the novel order? Forty dollars.