On Community - a DSN Story

Whew! OWS Cycon was quite the whirlwind after so many months of planning. However, it was a success, and I am very ready to get back to my normal blogging.
That being said, I have been waiting anxiously to get this one out...

In January of this year, I was asked to start volunteering with the Dysautonomia Support Network. After training, I became an admin on their biggest Facebook page, "Divas Dudes and Zebras." It quickly became my responsibility to accept and welcome new members. Around that time, DSN was planning for their annual Neuro-Connect Summit. I was invited to attend but was hesitant. First, there was the cost. Then there was the "I don't know anyone here yet and it scares the crap out of me" excuse. However, Cathy, my team lead there, wouldn't take no for an answer. She made sure I knew I was welcome and had a room covered. I just had to pay for the Summit itself. I thank God she persisted because...

Well, because I have NEVER in my life experienced anything so absolutely amazing, unifying, terrifying, and wonderful as that weekend.

As we got closer to the Summit, some members had shown interest in meeting me. I was also eager to meet Cathy and the few volunteers I had been getting to know. I arrived and was almost instantly greeted by one volunteer and then another. Once I deposited my stuff in the room I was sharing with two others, and figured out where I was supposed to be, the fun began. I started putting faces with names, learned more about DSN and the volunteer network, and was given quite a few hugs. There were some high tension moments where I was quite insecure, as some personalities make me want to retreat deep within myself. However, I watched as a couple of volunteers who were feeling unwell were doted on and taken care of, and you could feel the compassion and understanding in the room. As we were eating and then meeting about DSN, I looked around and was in awe that I was sitting in a room with people who were just like me.

That was amplified a hundredfold the next day, and I was incredibly unprepared for it. It started well, with my roommates and I getting along and having good conversations. They are totally awesome (and are adaptive dancers... EPIC!) I then helped put together the swag bags and get a few other things ready for the noon start. There was a lot of fun conversations as well as ones about our conditions which came across so naturally and casually. It was mind-blowing! Everyone knew and understood what everyone else was talking about! Come twelve, I went to make my way into the large conference room we were all gathering in, and my mind was blown. I'm a people watcher more than anything else and watched so many encounters between fellow dysautonomia, Ehlers-Danlos, gastroparesis, and Chiari patients. I was still pretty much clinging to Crystal, a volunteer I had been very eager to meet, but soon got to know so many others!

It was overwhelming. I was sitting there, listening to a speaker about physical therapy, and another about our swallowing issues, and others about so many topics which affect us... all of us... every single person in that room. I actually started tearing up over it. The room was freezing, so I used that as an excuse to step out and recompose. When another one of us became quite ill, you could feel it throughout the entire hotel. Every person in this community was worried. Every single one cared. I managed to make it through half of the presentations before needing to rest. My SI joint and I have been at odds for weeks now and sitting for too long was getting to be too much. I wanted to make sure I could go to our Patient Choice Awards and enjoy the night. 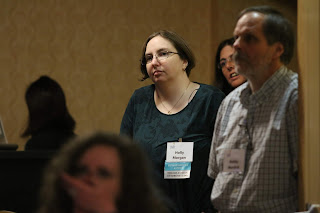 What an event that was! From our MC Josh Pray making us laugh while wearing his big heart on his sleeve, to the presentation of awards, acceptance speeches, the absolutely breathtaking adaptive dance to "Elastic Heart," the collective concern as another one of us became really ill and more, it was amazing. I found myself getting emotional once more, mostly because I wanted so very badly to know everyone better and have that close connection I was witnessing over and over.  Again, I wandered my way out to where I could stand against a wall and give my hip a break while still watching and listening and recomposing.

Ya... that didn't work so well. It was coming to the end of the awards show, and I knew something special was planned. I also knew many were hurting over the death of one of the volunteers and her picture was going to be in the final song. Let me tell you, there is no amount of emotional bracing which can prepare for a moment when a couple hundred people JUST LIKE YOU are standing, arm in arm, and swaying to Rachel Platten's "Stand By You."

I was standing with them but also apart from them. Most of my table had left and the rest were with the others in a long line of swaying and singing DSN volunteers. That's when one of the sweetest people I have ever met in my entire life, and who I loved every moment I got to spend with, reached over from her wheelchair and gently took my hand as I stood there crying from the overwhelming scene in front of me. Community... 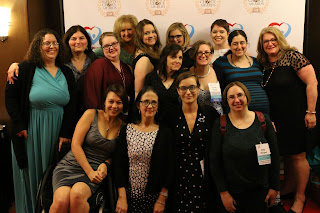